This is the old vignette - you find the new vignette on CRAN: OneR vignette

The following story is one of the most often told in the Data Science community: Some time ago the military built a system which aim it was to distinguish military vehicles from civilian ones. They chose a neural network approach and trained the system with pictures of tanks, humvees and missile launchers on the one hand and normal cars, pickups and trucks on the other. And after having reached a satisfactory accuracy they brought the system into the field (quite literally). It failed completely, performing no better than a coin toss. What had happened? No one knew, so they re-engineered the black box (no small feat in itself) and found that most of the military pics where taken at dusk or dawn and most civilian pics under brighter weather conditions. The neural net had learned the difference between light and dark!

Although this might be an urban legend the fact that it is so often told wants to tell us something:

The above is not only true for neural networks (and especially deep neural networks) but for most of the methods used today, especially Support Vector Machines and Random Forests and in general all kinds of ensemble based methods.

In one word: We need a good baseline which builds “the best simple model” that strikes a balance between the best accuracy possible with a model that is still simple to grasp: We have developed the OneR package for finding this sweet spot and thereby establishing a new baseline for classification models in Machine Learning.

This package is filling a longstanding gap because only a JAVA based implementation was available so far (RWeka package as an interface for the OneR JAVA class). Additionally several enhancements have been made (see below).

Design principles for the OneR package

The following design principles were followed for programming the package:

The package is based on the – as the name might reveal – one rule classification algorithm [Holte93]. Although the underlying method is simple enough (basically 1-level decision trees, you can find out more here: OneR) several enhancements have been made:

Getting started with a simple example

You can also watch this video which goes through the following example step-by-step:

Install from CRAN and load package 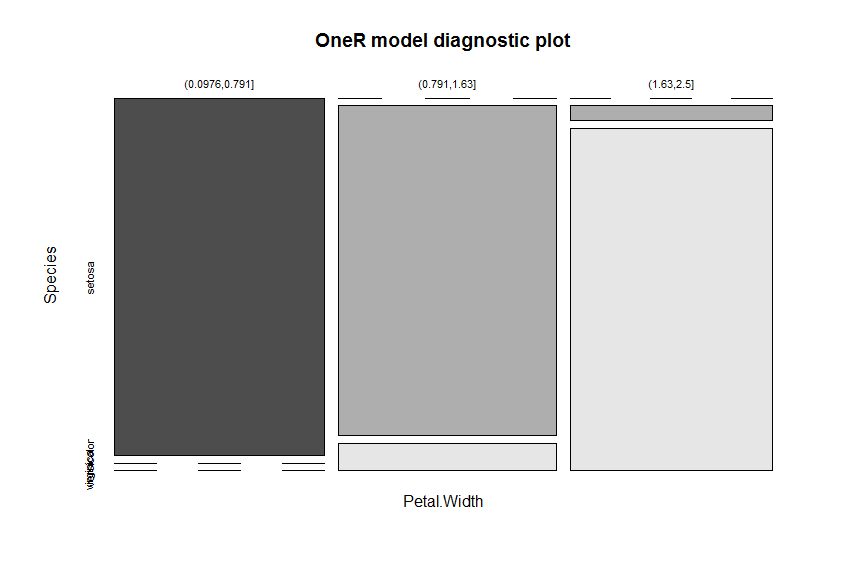 Use model to predict data

Please note that the very good accuracy of 96% is reached effortlessly.

Petal.Width is identified as the attribute with the highest predictive value. The cut points of the intervals are found automatically (via the included optbin function). The results are three very simple, yet accurate, rules to predict the respective species:

The nearly perfect separation of the colors in the diagnostic plot give a good indication of the model’s ability to separate the different species.

The next example tries to find a model for the identification of breast cancer. The example can run without further preparation: 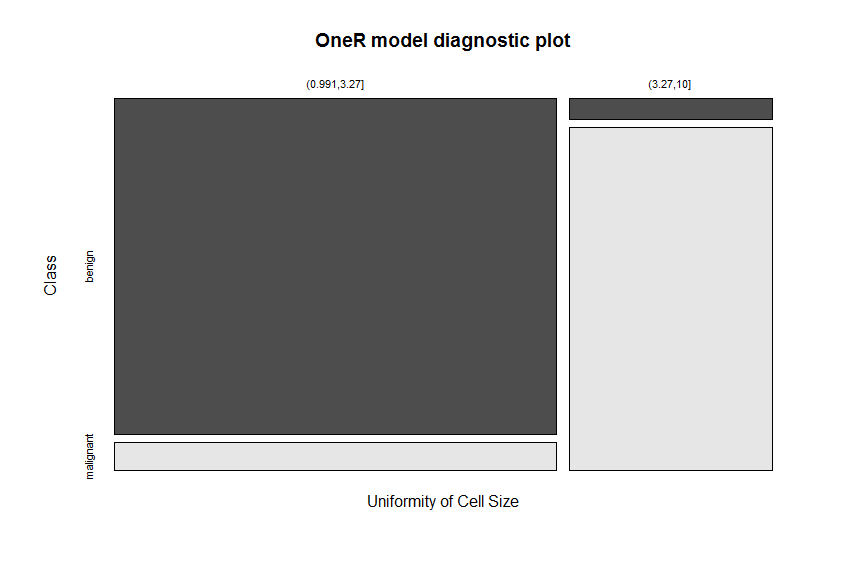 The best reported accuracy on this dataset was at 97.5% and it was reached with considerable effort. The reached accuracy for the test set here lies at 93.6%! This is achieved with the following two simple rules:

Uniformity of Cell Size is identified as the attribute with the highest predictive value. The cut points of the intervals are again found automatically (via the included optbin function). The very good separation of the colors in the diagnostic plot give a good indication of the model’s ability to differentiate between benign and malignant tissue.

I would love to hear about your experiences with the OneR package. Please drop me a note - you can reach me at my university account: Holger K. von Jouanne-Diedrich

This package is under MIT License.